The child has one intuitive aim: self development 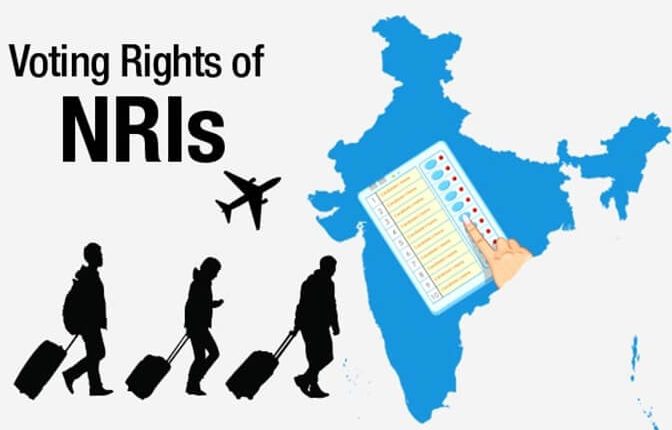 The 12-member committee appointed by the EC had consulted national political parties and the Ministry of External Affairs (MEA) on the options being considered for NRIs to cast their vote abroad.

The ECI had received representations from the Indian diaspora about facilitating voting through postal votes since travelling to India only for this purpose is a costly affair.
The Commission informed that it is technically and administratively ready to extend the Electronically Transmitted Postal Ballot System (ETPBS) to voters abroad for elections next year in Assam, West Bengal, Kerala, Tamil Nadu and Puducherry.

Current process of voting for NRIs

➢ Current strength of NRI voters: According to a UN report of 2015, India’s diaspora population
is the largest in the world at 16 million people. However, the registration of NRI voters has
been very low – a little over one lakh, according to the ECI.
➢ In the 2019 Lok Sabha elections, roughly 25,000 of them flew to India to vote.
➢ Voting rights for NRIs: Were introduced only in 2011, through an amendment to the Representation of the People Act 1950.
➢ Can only vote in person: An NRI can only vote in person in the constituency in which her
place of residence (as mentioned in the passport) is located.
➢ For establishing identity: She will have to produce her passport in original at the polling station.

Origin of the proposal

➢ Requests from several quarters: Including from Rajya Sabha and the Ministry of Overseas
Affairs, and three writ petitions were filed by NRIs in the Supreme Court in 2013 and 2014.
➢ A 12-member committee: Was set up after the 2014 Lok Sabha elections to study mainly three
options – voting by post, voting at an Indian mission abroad and online voting.
➢ In 2015, the panel finally recommended that NRIs should be given the additional alternative options
of e-postal ballot and proxy voting.
➢ Under proxy voting, a registered elector can delegate his voting power to a representative.
➢ The Union Cabinet passed the proposal on proxy voting rights for NRIs in 2017.
➢ The Bill, amending the Representation of the People Act 1950 was passed by Lok Sabha and was
lapsed with the dissolution of the 16th Lok Sabha and hasn’t been revived yet.
➢ After consultation with different political parties, the MEA expressed strong reservations over
attesting the declaration that NRI voters will have to send along with their marked ballot papers.
➢ How voting by postal ballots will work, if approved
➢ Will have to inform the Returning Officer (RO): According to the ECI proposal, any NRI interested in
voting through the postal ballot in an election will have to inform the Returning Officer (RO) not later
than five days after the notification of the election.
➢ On receiving such information: The RO will dispatch the ballot paper electronically.
➢ The NRI voters will download the ballot paper: Mark their preference on the printout and send it back
along with a declaration attested by an officer appointed by the consular representative of India in
the country where the NRI is resident.
➢ It’s not clear, at this moment, if the voter will return the ballot paper herself through ordinary post or
drop it off at the Indian Embassy.
➢ Does it require Parliament’s nod?: No. To extend the postal voting facility to overseas voters, the
government only needs to amend the Conduct of Election Rules 1961.